Fundscene, the innovative financial strategies magazine talked to Dr. Holger Bartel, CEO RealRate. In Issue 03/2022 Holger shares the vision he has with RealRate: Providing fair company ratings, without any conflict of interest. And finally avoiding having again a financial crisis like in 2008 which was heavily driven by rating agencies.

The key to this is using fair automated AI processes – and making them explainable, unlike the black box we currently have with neural networks.

Holger also explains the RealRate approach to AI being able to deal even with small data. The main AI rating result is a nice colored graph clearly showing the relative strengths and weaknesses of a company – easy to understand by everyone, ensuring explainability. 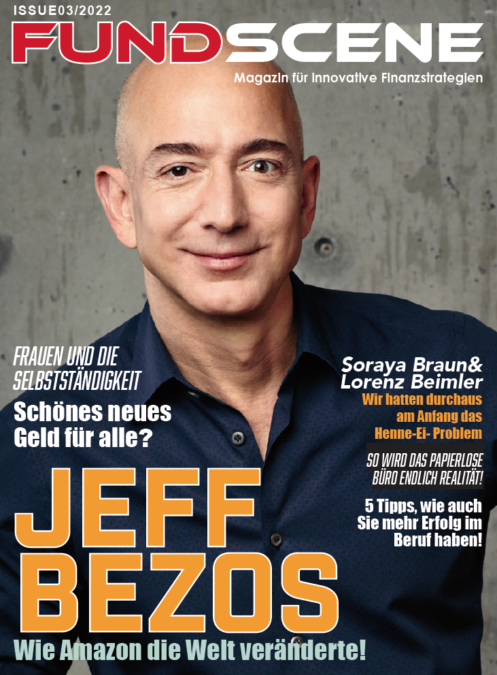 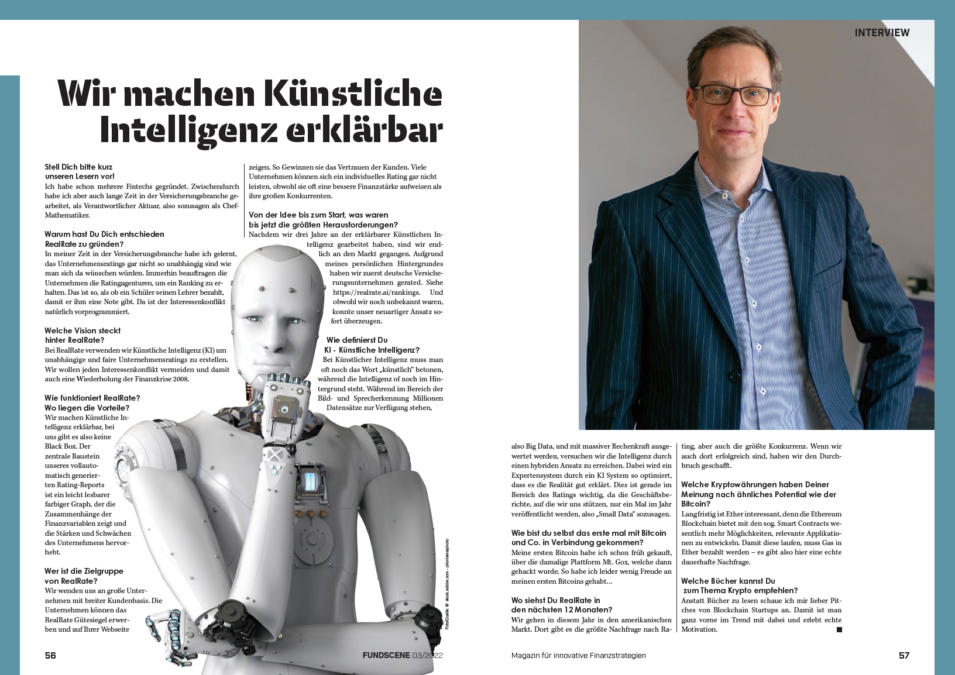 We have translated this article for you:

Please introduce yourself briefly to our readers!

I have already founded several fintechs. In between, however, I also worked for a long time in the insurance industry as the actuary in charge, i.e. as the chief mathematician, so to speak.

Why did you decide to start RealRate?

During my time in the insurance industry I learned that company ratings are not as independent as one might wish. After all, the companies hire the rating agencies to get a ranking. That’s like a student paying his teacher to give him a grade, to give him a grade. The conflict of interest is is, of course, pre-programmed.

What is the vision behind RealRate?

At RealRate, we use Artificial Intelligence (AI) to produce create independent and fair company ratings. We want to avoid any conflict of interest and therefore also a a repeat of the 2008 financial crisis.

How does RealRate work?
Where are the advantages?

We make artificial intelligence explainable, so there is no black box. The central component of our fully automatically generated rating report
is an easily readable colored graph that shows the correlations of the financial variables and the strengths and weaknesses of the company.

Who is the target group of RealRate?

We target large companies with a broad customer base. The companies can purchase the
RealRate seal of approval and display it on their website. This way they gain the trust of their customers. Many companies cannot afford an individual rating, even though even though they often have a better financial strength than their big competitors. their major competitors.

From the idea to the launch, what have been
the biggest challenges so far?

After three years of working on explainable artificial intelligence, we finally went to market. Due to my personal background we first rated German insurance companies. See https://realrate.ai/rankings. And although we were still unknown
our novel approach was immediately convincing.

How do you define AI – Artificial Intelligence?

With artificial intelligence, one often still has to emphasize the word „artificial“, while the intelligence of is still in the background. While in the field of image and speech recognition millions of
data sets are available, i.e., Big Data, and are analyzed with massive computing power, we are trying to achieve intelligence through a a hybrid approach. Here, an expert system is optimized by an AI system in such a way, that it explains reality well. This is especially important in the rating, as the annual reports on which we rely are published only once a year, i.e. „small data“, so to speak. published, so „small data“ so to speak.

How did you yourself first get in touch with Bitcoin
and Co. come into contact?

Where do you see RealRate in in the next 12 months?

We are going into the American market this year. American market. That’s where there’s the most demand for rating, but also the most competition. If we are are successful there as well, we will have made the breakthrough.

Which cryptocurrencies do you think have similar potential to bitcoin?

In the long term, Ether is interesting, because the Ethereum Blockchain offers much more possibilities to develop relevant applications with the so-called smart contracts. In order for these to run, gas must be paid for in be paid for in Ether – so there is a real permanent demand.

Which books can you on the topic of crypto?

Instead of reading books, I prefer to watch pitches from blockchain startups. That way you are at the forefront of the trend and experience real motivation.

Advertise your company with the RealRate seal of approval